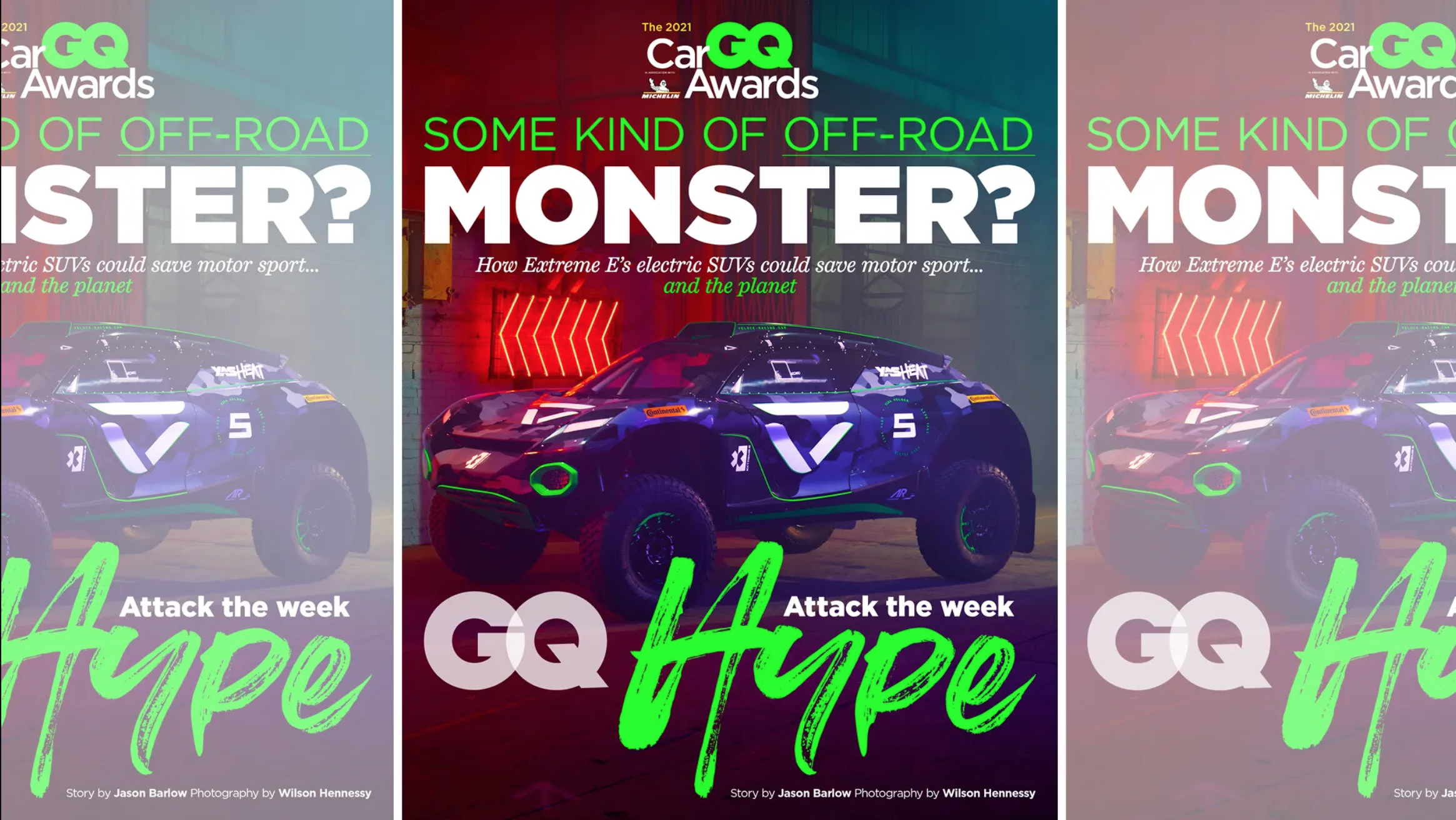 Can motorsport help save the world? It’s an unlikely proposition, but it’s one Extreme E is targeting. Here’s the pitch: take a grid of fully electric rally raid-style off-road buggies and transport them around the world to a series of wild and environmentally sensitive locations, including the Arctic, Brazilian rainforest, the Senegalese coast and Tierra Del Fuego on the southern tip of Argentina. Crazy, right? You’d give that a GQ Car Award, wouldn’t you? Of course you would. (All the winners will be announced on the @BritishGQ Instagram on 2 February at 11am.)

The X Prix races will consist of qualifying, semifinal and final sprint races, run across two laps on an off-road track five miles long. Each team will field two drivers, one male, one female, and they’ll switch places mid-race at the end of the first lap (promoting gender equality in motorsport is another significant element). The venues have been selected to highlight the unfolding ecological disaster in key parts of the planet, the sustainability remit being monitored and maintained by an independent scientific committee of Oxford and Cambridge experts. The championship’s power will be provided by a portable hydrogen fuel cell and the XE “paddock” will be freighted between locations on a former Royal Mail cargo vessel, the RMS St Helena, refitted to act as a mobile research laboratory.

The frontman for Extreme E is Alejandro Agag, the visionary – and salesman – behind the electric Formula E race series, now entering its seventh season. Plenty were cynical about its chances to begin with, but a zero emissions urban single-seater race series sounds eminently sensible compared to this latest venture. Agag has heard it all before. “There are people who think we’re taking big SUVs to beautiful places and destroying them,” he says, “but the places we’re racing in are already damaged. It’s impossible to damage a beach full of plastic or a deforested region. The important thing is that by going there and racing there, we’re going to raise awareness – and then we’re going to help fix it.”‍

GQ first met Agag in 2014 in Beijing, during the inaugural Formula E race and there’s no doubt that this former politician talks a good game. But he also has a knack for persuading the right people: XE has been granted full international race status by the FIA, motorsport’s governing body, while also attracting significant corporate interest. More importantly, in terms of box office at least, is the list of heavy hitters lining up to participate.

“JBXE has been a long time coming,” Button notes. “I caught the off-road bug a few years back, which led to me entering my own team in a few races, including the Mint 400 and even the Baja 1000, and I absolutely loved it. It was around the same time I first heard about the plans for Extreme E, which I’ve followed with great interest and what Alejandro, Ali [Russell, XE chief marketing officer] and the team have managed to create is nothing short of incredible.”

Adds Hamilton: “Not only will we visit remote locations facing the frontline of the climate crisis, we will also work closely with these locations and leading climate experts to share our knowledge and leave behind a positive legacy in each location, which goes far beyond the race track.”

The Extreme E racer is officially known as the Spark Odyssey 21, created and manufactured by French specialist Spark Racing Technology. It uses a steel-alloy tubular frame chassis, with a mid-mounted dual electric motor producing 536bhp and 679lb ft of torque, with a zero to 62mph time of 4.5 seconds and a top speed limited to 124mph (the batteries have been developed by Williams Advanced Engineering).

But outright speed isn’t as important here as the sheer spectacle of these big beasts monstering their way around hostile terrain.

For the 2021 Car Awards, GQ borrowed Veloce Racing’s Extreme E racer, which arrived in our hangar studio barely 12 hours after finishing a shakedown in France. “The spectacle of Extreme E is going to blow away so many other racing series,” team owner Dan Bailey says. “The technology and engineering is also incredible. The battery could power a UK household for 16 days or charge 2,100 iPhones simultaneously. Climate change is the biggest challenge this generation faces and no sporting platform has ever tried to actively address that. Yes, we have to move the cars from place to place, but doing nothing is never going to change anything. The broader message is to inspire global change, both from consumers and big companies. Sport has the power to do that.”

Veloce Racing has also made some clever hires. Alongside the highly versatile racer Stéphane Sarrazin will be rising British star Jamie Chadwick, reigning champion of the inaugural female-only W Series. “It’s a bit left-field from a racing perspective and a major new challenge for me personally, with it being off-road, an electric vehicle and an SUV,” she tells GQ. “It’s a massive beast, but feels quite small behind the wheel. I grew up on the Isle Of Man and used to mess about with buggies and quad bikes and it reminded me a bit of that. There was certainly a big adrenalin kick and when you enjoy driving something that much, you’re eager to figure what you need to do to go even faster. The first time I checked out the track we were testing on I thought, ‘There’s no way it’s going to get down there,’ but it did. And it’s going to involve proper racing. In single-seaters you’re trying to be pinpoint accurate and smooth, but with this you’re throwing it around on opposite lock.”

Elsewhere on Veloce’s payroll is Adrian Newey, Red Bull Racing’s chief technical officer and one of the biggest brains in motorsport. His job title is “lead visionary”. “It’s a bit of a grand title, but, in truth, I guess it encapsulates my role quite well,” he tells GQ. “I’m not involved in the day-to-day side of operations, but more in terms of the overall vision of the project. Extreme E is still in its infancy, which makes this a very exciting time to be on board. It’s up to the teams as Extreme E’s chief stakeholders to really drive the championship in the direction we want it to go. Given the technology involved and the purpose-driven ecological nature that sets the series apart from all others, I believe this global platform can open many doors and opportunities."

Newey recognises that there are some perception issues to overcome, but approves of the series’ decision to use a boat to move the circus around. “I think it’s a very innovative approach and one that has certainly generated a lot of discussion. Ultimately, with the current available technology and available funds, completely emission-free freight is not an option.

“Using sea freight is a much better option than air freight and we will hugely cut emissions as a result," he continues. ”In the end, freight transport is a necessary evil, but the good that will come as a result of Extreme E’s great work will far outweigh this and the UN believes this as well. David Attenborough’s shows have an associated carbon footprint, but the awareness they bring hugely outweighs it.”

One of Veloce Racing’s other co-owners is former F1 driver and double Formula E champion, Jean-Éric Vergne. I ask him if the rise of Extreme E is further proof that motorsport is on an increasingly political trajectory, following Lewis Hamilton’s high profile embrace of Black Lives Matter in 2020.

“I don’t work in politics. I work in sport,” he says. “But to have the opportunity to do something beyond racing is one you can’t say no to. There are many subjects that I’m personally interested in, global warming being one of them. Deforestation is an issue that concerns me and part of the job of Extreme E and Veloce Racing is to raise awareness of what is happening there and what it is costing us. Motorsport is one of the few in the world that can do this. It’s a huge opportunity to do something more than sport and business.

“In the junior racing categories we were constantly being told what to do, what to think, when to smile, when not to. But I realised with time that we all have our voice and it’s a question of how to use it and about using it in the right way. It’s OK to send messages that are important to us. If Lewis thinks something, it’s up to him to say it and he got the support of Formula One and Mercedes. They wouldn’t haven’t backed him if they didn’t think it was right, but if Lewis hadn’t pushed it maybe it wouldn’t have happened.” ‍

The winners of the British GQ Car Awards 2021, in association with Michelin, will appear on British GQ's Instagram at 11am on 2 February. Full coverage will also appear in the March issue of GQ, on sale 4 February.